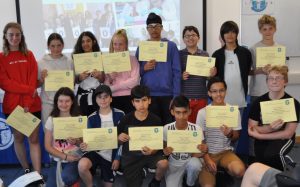 Supporters, students and staff gathered to celebrate the success of LifeLab, our project aimed at improving health outcomes through scientific discovery.

The annual LifeLab Showcase was a chance for the project’s community to come together to reflect on the year’s achievements.

It is a year that has seen LifeLab continue to grow, partnering with more schools across the South and the Midlands, all committed to the approach that by allowing young people to discover for themselves the impact that lifestyle choices can have on their health, they will be empowered to make better choices.

In a year which saw the 10,000th student welcomed to the pioneering project, guests also saw awards handed out to those who have produced exceptional research projects and who have qualified as a Young Health Champion (YHC).

The YHC is a scheme accredited by the Royal Society of Public Health this year students from Thornden School gained the award after completing their training at LifeLab and going on to produce campaigns on a social or health issue that was relevant to their own community.

Themes included the impact of social media and mobile phones on mental wellbeing.

The scheme is also available to schools in Southampton where it is run in partnership with Southampton City Council and the Saints Foundation.

Invited guests also heard from a range of speakers including a number of teachers, Southampton City Council service manager Jason Murphy, non-executive director of University Hospital Southampton Jenni Douglas Todd and students themselves. Several from Cantell School in Southampton gave the audience an insight into what they had enjoyed most about their LifeLab experience.

The audience also heard from Lisa Wright a teacher at Orchard Infant school in the New Forest who has been piloting the Early LifeLab programme aimed at younger children while news was also shared that the next phase of the new research project EACH-B was beginning.

The EACH-B project is built on the existing LifeLab programme which aims to help young people understand how the decisions they make now could have health implications in later life but with the addition of using a gaming platform to encourage them to eat better and move more.

Programme manager Dr Kathryn Woods-Townsend said: “We never get the time during the year to really reflect on all the fantastic things that happen each and every day so the Showcase really gives us the opportunity to remember what a difference this project is making to the health of future generations.

“It is also great to see new faces every year as we continue to welcome more people into the LifeLab community. With the renewed focus on the importance of living well and empowering society with the knowledge we need to make better decisions about our health, LifeLab has never been a more important part of that movement.”

LifeLab is a unique teaching laboratory which is part of the NIHR Southampton Biomedical Research Centre based at University Hospital Southampton in partnership with the University of Southampton. 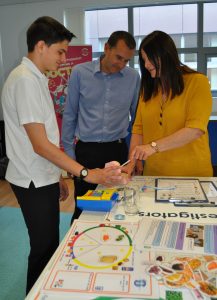 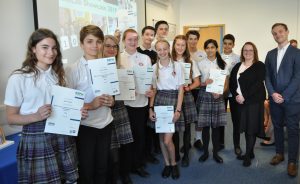