In the week when we heard that Southampton was one of the four cities shortlisted in the City of Culture 2025 competition, it felt like a good opportunity to share more about our Climate Change Theatre project. We feel very excited about our involvement with this project and the way it showcases how we can use science and art to inspire young people and how the arts can be used as a powerful vehicle to engage people with the global issues facing us all, spread understanding and reach new audiences.

Telling the story of climate change is a challenge being undertaken by a group of young people who are bringing together science and art in a unique project.

With Southampton and surrounding areas being both the inspiration and backdrop for the piece, our climate change youth group have been spending time in 3 different environments; the forest, the beach and the city finding out more about the impact of climate change on these areas and the opportunities for individuals to take action.

Only 15 minutes on the train from Southampton, the New Forest is a world away from the hustle bustle of modern life.  Working in partnership with the New Forest National Park Authority, we visited 3 different locations; the ancient woodlands in Beaulieu Estate with the Countryside Education Trust, Brockenhurst and a cycling experience at Ashurst with PEDALL cycling. As we explored each thriving green corner, our guides shared how the Countryside Education Trust was tackling climate change through nature recovery – restoring natural habitats to enable wildlife to thrive, both within and around the national park. These three sessions had a hugely positive impact on our young people, particularly those with long term health needs.

Our of our parents said:

‘He took two big lungfuls of New Forest air and wondered what he was being anxious about.’

The group were keen to know how we can play our part in small ways to help reduce the impact of our lives on the environment around us and were given the example of reducing car journeys. During lockdown more deer were seen around villages in the New Forest due to fewer cars being on the roads.

The group then continued their explorations on Weston Shore with marine biologist, Holly Jenkins. Holly got our young people to take part in scientific demonstrations, litter picking, and talked to them about how we can mitigate threats to our local coastlines such as global warming, acidification, overfishing and plastic pollution, as part of British Science Week, the young people produced video campaigns under the heading ‘The Oceans are rising and so are we’

Our third and final environment was focused on an urban environment. Working with the Southampton National Park City Project, our group has been looking at air pollution and sustainable farming and appreciating the green areas we have on our doorsteps without even realizing. The morning spent at City Farm Southampton was a moment of calm, only a couple of minutes away from the busy and bustling city.

To round off the discovery part of this project, our young people will be exploring the role of government in setting policy to support climate change action. From the local government perspective, Cllr Chris Hammond will be talking to our group about the challenges facing cities, in particular for Southampton, air pollution and we will also be taking our young people to meet with Steve Brine MP and Alok Sharma MP and COP26 President to hear about the opportunities and challenges from a National and International perspective.

Then, the exciting work begins, inspired by what they have discovered over the past few months, our youth group will devise, storyboard, produce and perform a piece of theatre which will tell the stories of climate change in these different environments.

These will be performed over the Jubilee Bank Holiday weekend in Southampton (Palmerston Park) on 2 June and in the New Forest (Countryside Education Trust, Beaulieu) on 4 June – look out for details of the free performances in the coming weeks.

Find out more about the project here:

Climate change is a subject never far from the media spotlight. Whether it is debating the impact of rising sea levels, fears over the effects of increasing pollution levels or the growing pressure to produce more crops for a population increasing in size at an extraordinary rate– climate change is front and centre of public interest.  But what effect it having on our health?

Over the past two weeks world leaders at the UN-led COP25 talks have struggled to agree on a range of climate pledges that countries will be required to deliver on by the end of next year. So is it time we took more responsibility as individuals to examine how our own decisions can effect climate change?

It is a circular problem. For example, climate change is destroying the planet, but how does it affect our health? How much do we really know about how our own health choices can impact the health of the planet? Are world-wide solutions the only answer or can we all make different choices around our diet and lifestyle that could add up to big changes?

Making the connection between those headline-grabbing news stories and how our own health choices can play a part in the solution is the basis of a new outreach project based at the University of Southampton. 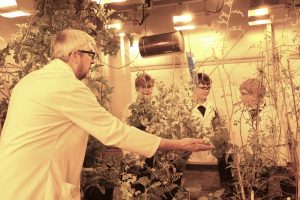 Dr Mark Chapman from Biological Sciences in the Faculty of Environmental and Life Sciences and Dr Lucy Green from Human Development and Health based at the Institute of Developmental Sciences in the Faculty of Medicine have teamed up with LifeLab to create a hands-on research project for teenagers, with funding from the Public Engagement with Research unit (PERu) at the University of Southampton.

Using the same self-discovery approach that has underpinned the success of LifeLab, the new project is aimed at giving students the space and resources to understand for themselves what impact their health choices could have on climate change.  And growing plants is at the heart of the project 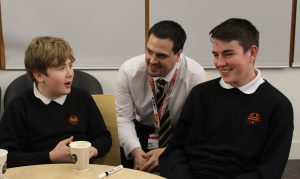 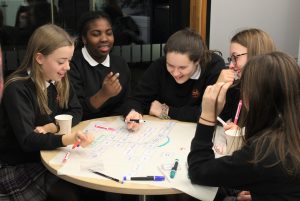 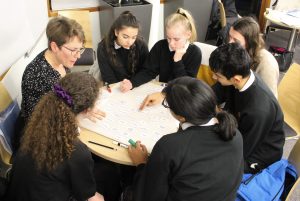 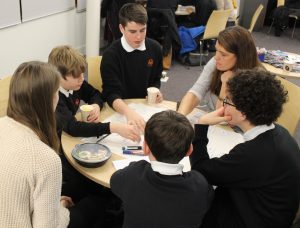 A group of year 9 students from Thornden School have become the first to try out this new project that saw them invited into the Highfield Campus to tour the state-of-the-art growth rooms and greenhouse facility and take part in workshops examining links between climate change, crops and individual health.

The aim is to support them in making the connection between the environment and their own health choices. They held discussions around the scale of deforestation, plant-based diets, the effect of environmental toxins and climate change on their health, and whether growing more of our own food instead of relying on transported imported products could have an impact.

“I was surprised how much the students knew about climate change,” said Mark after the event, “It was very rewarding to see them ‘join the dots’ between climate change, feeding a growing population, and how this could affect their health”

Lucy added: “We know from our science days and recent ‘Toxic!’ question  time  event  at the University that involving young people in the science, and supporting them in discussing and asking the tricky questions about these big environmental issues, could really affect their actions in relation to the environment and their own health choices.”

The session was also used to plan plant-growing experiments, testing how temperature, salt and light could have an effect on crops. A follow-up visit is planned by the project leaders to check on the progress of the plant experiments which will be transferred to growing towers that can support the development of plants all year round using a hydroponic system. This will examine whether a stress in early life of the crop will have a lasting effect throughout the plants’ life cycle.

The growing towers are a new feature of the LifeLab project which aims to help young people discover the science behind health messages and is based at the University Hospital Southampton within Southampton Education School in the University of Southampton Faculty of Social Sciences and Biomedical Research Centre.

Thornden student Ewan said he had been inspired by the first session.

The year 9 student said: “I thought it was a great session as it was a chance to talk about the major factors that affect climate change, and also the effect we can have on the environment.

“Coming into the University was a great opportunity especially seeing the experiments that go on in the greenhouses. It was a great experience and a chance to discuss the subject of climate change which we hear about in the media but which I don’t think we get to really talk about enough.”